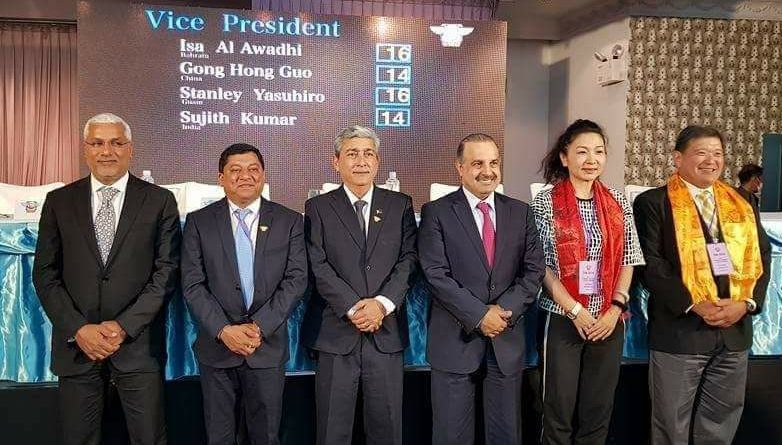 He won with a majority of 18 votes to 9 from sitting President Wan Ahmad Zaharuddin of Malaysia, who had ousted the Filipino in 2013. It is the first time in the 20 year history of motorcycle racing’s regional governing body that anyone has come back to re-take the presidency.

Motorcycle racing is enjoying healthy growth in Asia, with more events and more riders competing in world championships, now with two riders in MotoGP and more in Moto2, Moto3 and World Superbike and Supersport. However, with sluggish economies and the number of member countries now standing at 28 and increasing quickly, the next four years will present a series of challenges that the incoming president and the rest of the board will need to be on their toes to meet and to manage effectively.

“Now we can get on with our work,” commented Carapiet following his election, “There is a lot to do to improve communications with member federations and the way we work with FIM Headquarters in Switzerland. We will increase numbers of FIM Asia sanctioned events, including three-nations competitions and see more rounds in the core road racing, supermoto and motocross championships.”

The outgoing President congratulated his rival, saying, “In the end we are friends and I wish Macky success with his presidency. Sometimes you have to step aside and welcome the change. It has been an honour to serve as President and I remain committed to supporting the work of FIM Asia in any way I can.”

In a colourful contest for the four vice presidential contests that featured 11 candidates, Bahrain’s Isa Al Whadi was the only member of the previous board to be re-elected. “I am surprised in a way,” he said, “I work hard in circuit and off-road racing and don’t say too much, so it is good to have this recognition and get re-elected. I will continue to do the best job I can to support FIM Asia.”

India’s Sujith Kumar was a popular winner. The seven times Indian Rally Champion is now chairman of his country’s Two Wheeler Racing Commission and has done much to improve riding standards and safety as well as bringing international events to India, such as the Asia Road Racing Championship (ARRC) and the Asia Cup of Road Racing (ACRR). “My focus is purely on the development of two-wheeler motorsports and the good of the riders,” he commented. “I believe that now is the right time to ensure that India is represented on motorcycle racing’s regional governing body so that it can influence the development of the sport throughout Asia in the best possible way.”

China’s Gong Hong Guo stood out as a strong candidate during her campaign and joins the board as the only female Vice President, bringing extensive experience as an official and as her national federation’s Sports Department Deputy Director. “This is an exciting result and I look forward to working with the rest of the new board,” she declared. “As well as China, I will continue to collaborate with and represent my colleagues in Taiwan, Macau and Hong Kong. We will do the best we can for motorcycle racing throughout Asia.

Stanley Yasuhiro becomes the first Vice President to be elected from Guam. A long time active supporter of FIM Asia, he commented, “I am proud to have been elected. Guam is a tiny country, but we punch above our weight and have two current Asian motocross champions in Junior 85cc and MX2 classes. I still ride compete as a veteran and want to give as many young riders as possible the right introduction to the sport and the opportunity enjoy racing and to be successful.”

The General Assembly was hosted in Bangkok by the Federation of Motor Sports Clubs of Thailand at the Baiyoke Boutique Hotel. It was followed by a Gala Dinner to honour Asia’s 2017 champions. The 2018 season gets underway in just three weeks, with the ARRC Official Test on February 27-28 at Chang International Circuit, which will be followed by Round 1 on 2-4 March.