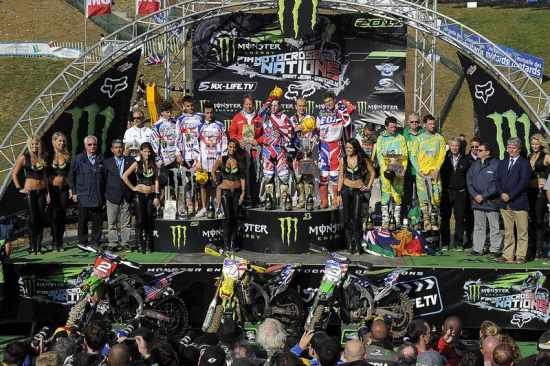 The USA Motocross Team of Ryan Villopoto, Ryan Dungey and Blake Bagget, had their backs against the wall and were on the verge of losing the Chamberlain Trophy, the coveted symbol of world motocross supremacy that had been theirs since 2005.

Villopoto and Dungey dug deep in to their vast riding arsenal to pull off a classic 1-2 windup in the MX1 + Open finals to retain the title during the 65th edition of the Monster Energy FIM Motocross of Nations held on September 18 at the Saint Jean d’Angely in France.

With the win, the Americans extended their winning streak to 7 years in a row and their total to 22.

The French Motocross team of Steven Frossard, Marvin Musquin and Gautier Paulin fell a tad short of winning the title on their home turf as they failed to match the Americans in the payoff moto.

The Australian team of Chad Reed, Matt Moss and Brett Metcalfe had reason to celebrate as they secured their first ever podium finish in the MXoN.

For more information on the FIM Motocross of Nations and other FIM events, visit www.motocrossmx1.com and www.fim-live.com.