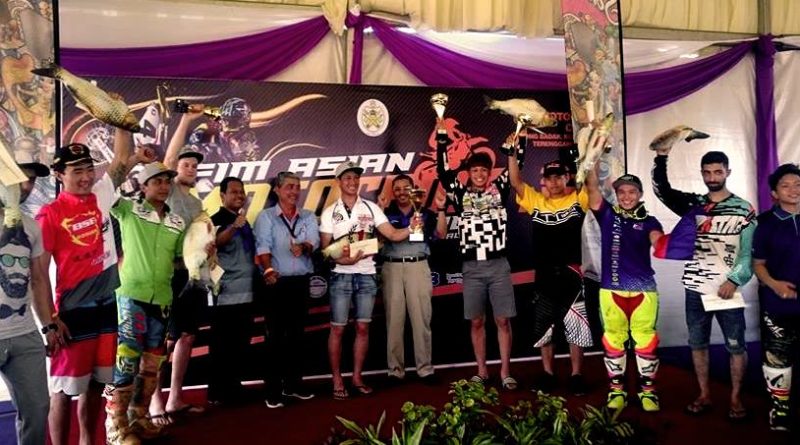 (Kuala Terengganu, Malaysia) – Japan’s Takase Tanaka (100) and Shuma Kobayashi (86) lived up to their billing as “the boys to beat” by dominating the competition in the Asian MX2 motos during the opening rounds of the 2018 FIM Asia Motocross Championship Series held at the Motocross Komplex Sukan Gong Badak in this city over the weekend.

Philippine Motocross Champion Kenneth San Andres’ podium drought is over. San Andres threw all caution to the wind to deliver a spirited ride that earned him the 3rd spot on the podium in round 1. He is currently 5th in the championship scoreboard and a formidable contender in the title chase with 68 right behind third and fourth-placed Phanuphong Somsawat of Thailand (72) and Russia’s Mikhael Kuzovov (70).

Malaysian riders Rizal Zakaria (94) and D Suhaimi Bin (92) drew motivation from the cheers of the hometown gallery to fend off the challenge posed by the Filipino tandem of Alan Mollenido (76) and 2017 Asian MX Veteran’s champion Marciano “Jun” San Andres (72) and Mongolian Byambaa Batsengel (67) and grab the 1 and 2 spots in the Asian MX Veterans scoreboard after 2 rounds.

The Asian 85 category races were no less interesting and action-packed as those of their senior counterparts. The “new kids on the block” awed spectators as they brandished the grit and riding savvy of veterans in their motos.

Indonesia’s Nakami Vidi Makarim (97) led the Asian 85 class at the break with the Philippines’ David Viterbo (84) and Thailand’s Jiraj Wannalak (83) close behind him on the scoreboard.

The 2018 Kuala Terengganu Motocross Grand Prix marks the 6th year that the city is hosting the Malaysian legs of the FIM Asian Motocross championship. The event is held at the Motocross Komplex Sukan Gong Badak with the cooperation and hospitality of State of Terengganu under the leadership of HRH Sultan Mizan Zainal Abidin.