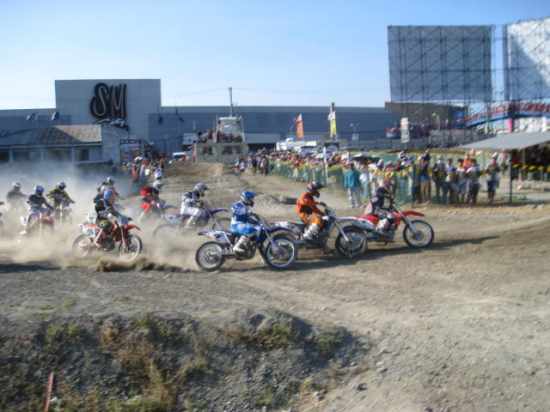 Japan’s Tomoya “Kamikaze” Suzuki put on a stunning display of grit and skill behind the handlebar to rout the opposition and clinch the round pennant of the 2nd leg of the 2010 FIM Asian Motocross/Supercross Championship series held Sunday at the Speedworld MX Circuit in SM City Bicutan.

The international motorcycle sport event organized by the National Motorcycle Sports and Safety Association (NAMSSA) was sponsored by the City Government of Paranaque led by the Mayor Florencio Bernabe, Jr., SM City Bicutan, the Department of Tourism and Monark Equipment.

With the win Suzuki toppled the highly touted Mongolian Express Khaliunbold Erdenbileg from the top rung of the championship roster. Suzuki took the holeshot in the opening moto and never looked back.

In the second moto, Amir Sabetifar of Iran took an early lead but a misshift allowed the Japanese and Erdenbileg to overtake him. Suzuki held on to the lead all the way to the checkered flag but Erdenbileg lost his handle on second position after stalling his bike coming out of a berm to allow Sabetifar to pass him.

After the smoke had cleared, Suzuki found himself atop the podium with 50 points. Sabetifar and Erdenbileg settled for second and third places respectively first place with 42 markers each. The other Japanese entry Takeshi Tabuchi and India’s C.S. Santosh completed the top 5 ending up in 4th and 5th places respectively.

Two Filipino entries made it to the top ten with the ageless veteran Jolet Jao landing in 6th and Migi Tolentino salvaging the 9th position. The seventeen year old Iranian Ali Borzoozadeh copped 7th place, while Mongolia’s Ganod Boldbataar and Guam’s Errol Angoco ended up in 8th and 10th places to complete the top ten shortlist.

The country’s top rider Kenneth San Andres succumbed to a 2nd moto crash that knocked him out of contention but not after putting up a good run in the opening moto where he finished fourth, a notch behind the riders who eventually ended up in the overall podium positions at day’s end. Cebu’s Jonjon Adlawan was hounded with engine problems all day that resulted to his failure to complete the required number of laps.

Nueva Ecija’s Jean Erick Mitra extended his lead in the Asian Junior 85 championship race when he scored identical victories in both motos. Guam’s Troy Corpuz and San Pablo City’s Moymoy Flores finished second and third respectively in the two motos to cop the same positions in the final podium standings.

The Philippine motocross team that competed in Sunday’s round will be heading down down to Valderrama, Antique for the 1st Evelio Javier Invitational Motocross Championship on April 25. The event will be spiced up with the participation of foreign riders and is the first of the series of tune-up races that will prepare them for the FIM Motocross of Nations in Denver, Colorado in September.

For more information on the Asian Motocross/Supercross Championship series, the FIM Motocross of Nations, NAMSSA’s National Motocross Series, log on to www.namssa.org or www.asiamx.org.