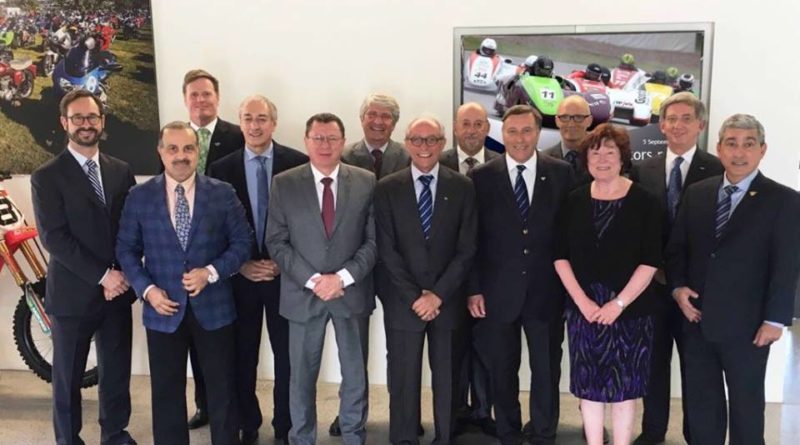 The FIM Board of Directors met in Mies, Switzerland on Wednesday 5 and Friday 6 September. The FIM Board Committees for Strategic Plan, Awards and Recognition, Risk Management, Affiliation and the CONU Presidents also met on Tuesday 4 September. The FIM President Mr Vito Ippolito highlighted the importance of good governance within the FIM structures and reviewed the progress made in this respect over the past 50 years. The FIM CEO Mr Steve Aeschlimann updated the Board on several important activities and projects. On the Riders’ Insurance Scheme, he provided details regarding the contract, the general conditions and the dedicated communication campaign that will start shortly. Mr Patrick Vajda, the insurance broker, was invited to answer the Board members’ questions. The CEO presented a synthesis of the responses to the FIM Biennial Survey of FMNs and stressed the importance of the participation of National Federations in this data-collection exercise. The Sports Director, Mr Fabio Muner, updated the Board on the situation regarding various sporting disciplines including Enduro and SuperMoto. The Programmes Director, Mr Damiano Zamana, gave a first feedback regarding the FIM Road Safety campaign ‘We, the Riders’ launched during the MotoGP weekend in Austria on August 10. He also talked about the European Training Quality Label for motorcyclists’ training schemes and the situation with regard to the European Motor Insurance Directive. The Board validated the 2019 budget to be submitted to the General Assembly for approval in Andorra. The FIM Deputy CEO, Mr Richard Perret, presented his report on the Corporate Services. In particular, he highlighted the Legal Department’s support for various key activities within the Technical Department. A meeting had been held with the FIA with the long-term objective of close cooperation between the two Federations in matters of safety. In terms of commercial matters, the FIM Certification programme is being overhauled so as to provide an alternative way for manufactures and products not eligible for homologation to be associated with the FIM. In terms of Medical and Anti-doping activities, he highlighted the risk assessment being conducted at the instigation of WADA in order to enable the FIM to target its Anti-doping efforts more cost-effectively. The FIM Communication Manager, Ms Isabelle Larivière, presented an update on the FIM Emergency Procedure and the Crisis Communication Plan, a long-term and cross-department project to be put in place across all the FIM’s disciplines. The Director for the CEO Office, Planning and Projects, Mrs Françoise Emery, provided information regarding the 2018 FIM General Assembly and FIM Awards Ceremony that will take place in Andorra on the first weekend of December. The Board ratified the appointments of the FIM Commission Members for the four-year term beginning on 1 January 2019. The membership of the International Commission of Judges will be submitted to the General Assembly for ratification in Andorra on 1 December 2018.