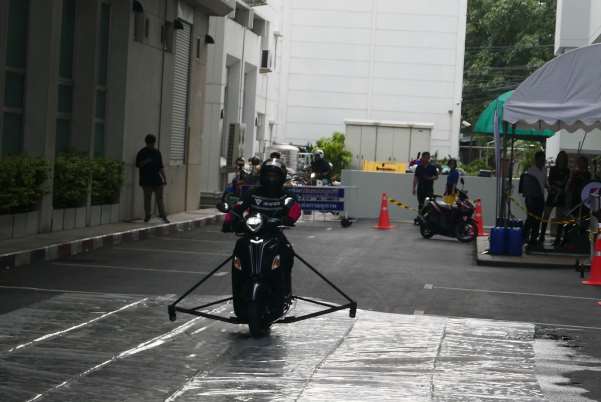 A series of events were held in Bangkok, Thailand commencing with a Vehicle Safety Course on 6th August hosted by the King Mongkut University.

Using several motorcycles, the media were also shown anti-lock braking and combined braking systems in action. Using water and plastic sheeting to produce a slippery surface. With anti-lock braking disabled the safety bars fitted to the demonstrator machines were needed!

Representing the FIM was John Chatterton-Ross, Executive Secretary International Affairs. From the FIM federation in Thailand, and also representing FIM Asia, was Mr Thongchai Wongsawan. He also assisted in briefing the media representatives prior to the demonstrations.

Earlier in the day the Vehicle Safety course at the University was well attended. – A number of presentations related to motorcycle safety were made.

There was also an exhibition where companies in attendance showcased the latest technologies with engineers on hand to explain all aspects.

Dr Wiwat Seetamanotch was one of the lead organisers for this event and the two-day national road safety conference that followed. Dr Seetamanotch is also an honorary advisor to FIM Asia. Along with other experts he is advocating for the Royal Thai Government to adopt regulations for ABS fitment to small motorcycles which form the majority of those used in the country.

FIM Asia President Stephan Carapiet says, “We wish to congratulate all those involved in the advocacy of road safety and stop the crash movement. Anti-lock braking system (ABS) in this physical live demonstrations and studies have been proven to be a big safety factor for the motorcycle riding public for all motorcycle capacity size of units. The FIM Asia fully endorses and encourages other local government and countries to install mandatory ABS on all motorcycles for sale to the public in order to increase road safety in our public roads.”