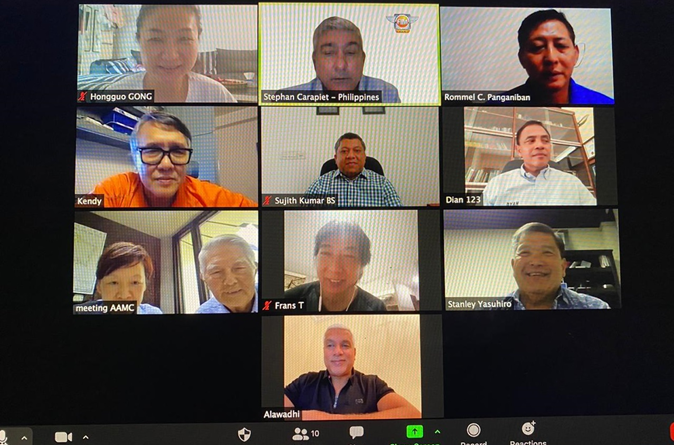 The first quarter of 2020 FIM Asia Board of Directors meeting chaired by the honorable FIM Asia President Mr. Stephan P. Carapiet took place online via Zoom this 29th of May 2020 at 1500 hrs ( GMT +8).

Agenda taken up during the said meeting were mostly focused on actions taken such as the FIM Asia Cares Project wherein donations were sent to all FMNs and other recipients outside of Asia during this time of Pandemic thru the assistance of FIM Asia, AAMC of Macau and Ms. Gong Hong Guo of CAMF of People’s Republic of China, FIM Asia hosted the first Virus Crisis Webinar last 24th of April 2020, also mentioned was the finish line tower for the FIM Asia banner at the Sepang International Circuit in Malaysia and the launching of FIM Asia digital moto championships online mobile phone game which is in line for the FIM Asia “Race at Home” program.

Mr. Stephan Carapiet, FIM Asia President also presented and discussed before the members of the Board the draft of FIM Asia Event Safety Protocols to be implemented when the events are finally resumed under the “new normal” situation.  The President also seek any ideas or suggestions from the Board members of any projects that can be done during this virus crisis to help the motorsports as well as the FMNs as part of its social responsibility project under the FIM Asia cares program. The status of the FIM and FIM Asia General Assembly and Awards for this year 2020 has been discussed also which are still dependent on the situation amidst this virus crisis.

The FIM Asia Board of Director’s Meeting ended with a more positive outlook and is now moving forward for the safety and betterment of our CONU  in facing the “new normal” situation lies ahead. The FIM Asia President thanked everybody for another perfect attendance in the meeting and for the usual support, information, suggestions and untiring support.