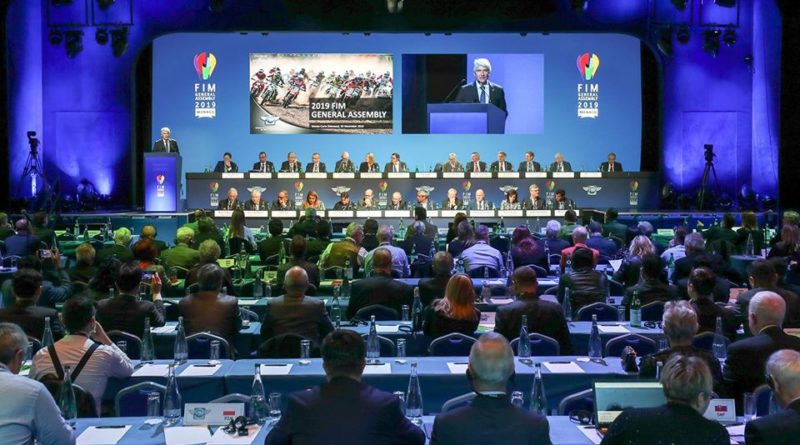 The topics put to the delegates of the national federations present were the following:

Strategic Plan: Throughout 2019, and thanks to the new FMN & CONU Liaison & Events team, a survey was conducted to seek the opinions of the National Federations and the Continental Unions and make their voices heard. The outcome was very positive, as the Federations were able to voice any concerns and expressed their enthusiasm at having a clear point of contact in Director Nita KORHONEN and her team of two, Anne-Laure REY and Aurélie GROB. This dialogue and transparency are one of the key aspects of the VIEGAS Presidency: in this new era, the guiding principles are accessibility to all, fairness and social responsibility. The FIM intends to succeed in its mission of developing motorcycling sport and protecting the interests of all motorcyclists. To do so, the international federation is setting up national and continental training camps for riders of all ages, creating more seminars for Officials and trainers alike, and setting standards for road safety and sustainability. According to President VIEGAS, all this can only be achieved by improving the cooperation between riders, the industry, the public, and amongst the FIM itself – its FMNs and CONUs.

IFM (International Foundation for Motorcycling): The FIM General Assembly approved the creation of a Foundation for the FIM, the aims of which include creating new sources of revenue and uniting key motorcycling stakeholders around FIM projects.

KTM/WESS: Since the beginning of the year, the FIM has been openly talking with the KTM Group and the promoter responsible for the existing “Extreme Enduro Series” in order to find a way to improve the Enduro discipline. The FIM stays firm with regards to environmental rules, safety conditions, protection of riders and controlling the sport. A new meeting will take place in February 2020, where all parties hope to reach an agreement.

SSV (Side by Side Vehicles): Despite their best efforts, an agreement was not possible between the FIM and the FIA on the matter of SSV Classes. The FIM will proceed with its own production category of light vehicles.

Enduro / Enduro “Extreme”: Two different tenders were launched: one for the promotion of the FIM Enduro World Championship 2021-2030 and another for a new FIM Enduro Extreme World Cup 2020-2029, with the objective of bringing together the Enduro family. The FIM hopes to receive interesting offers.

Speedway: A tender was launched during the third trimester of 2019 for the promotion of the FIM Speedway Grand Prix World Championship for 2022-2031. Various offers were submitted to the FIM Board of Directors, who chose after much consideration to sign with Discovery / Eurosport Events as their proposal was the most interesting and innovative from a sports, development and TV coverage point of view. The FIM would like to thank BSI for its dedication and hard work and hopes to collaborate with them again in the future.

E-Bike: The delegates approved the creation of an E-Bike Commission, composed of members from various continents. The Commission, initially headed by Mr Jean-Paul GOMBEAUD, FIM Sport Director, will be fully operational once its members hold the relevant licence after completing the seminar to take place on 3 December in Paris, France.

Insurance: As of 2020, the Rider’s insurance policy (Emergency Medical + Repatriation + Death and Disability) held by the FIM with TSM will cover all disciplines except E-Bike amateur licences. This is a great step forward for all riders (although exceptions apply for cross-country rallies).

Election of a new Board Member: Following the election of Mr Jorge VIEGAS to the Presidency of the FIM, his seat at the Board of Directors had been left vacant and his period of office to be completed. The delegates of the National Federations chose his successor from two candidates: Mr Ignacio VERNEDA, former CEO of the FIM, was elected as new Board member for the remainder of Mr VIEGAS’ office (1 year). Mr VERNEDA was then appointed by the Board of Directors as Deputy President.

CJI: Following Mr Anand SASHIDARAN’s resignation due to heavy professional workload, the voting delegates of the National Federations confirmed the appointment of Mr Robert HOFSTETTER as Director of the International Commission of Judges. Mr SASHIDHARAN shall remain a member of the Commission.

Affiliations: The Assembly welcomed its two new members, as the delegates accepted the affiliation requests for the FADM, the Angolan Motorcycling Federation, and the CMSF, the National Cambodian Federation. Meanwhile, the FMNs accepted the resignation of the BiHAMK, current Bosnian Federation who chose to leave the FIM as of 31 December 2019, and welcomed its replacement, the MS BiH starting 1st January 2020. The FIM General Assembly, upon proposal of its Board of Directors, considering that the AAM (Automobile Association of Malaysia) no longer complied with FMN membership’s criteria stated in the FIM Statutes and By-Laws, voted to expel the federation. Meanwhile, the MAM (Motorsport Association of Malaysia), having submitted a complete affiliation request, in accordance with the FIM Statutes and By-Laws, was voted in as new affiliated federation for Malaysia.

Within the framework of the dispute with KMSC (Kuwait Motor Sport Club) and the FIM, a CAS (Court of Arbitration for Sports) award issued on 14 October 2019 ordered the FIM to submit to this ordinary GA, for decision, the expulsion of its current member KIAC (Kuwait International Automobile Club) and the affiliation of its challenger KMSC. As required by the CAS award, the expulsion of KIAC and the affiliation of KMSC were to be considered by the GA at the same time. The GA voted KIAC to remain as the official FMN in Kuwait.

Amendments to the FIM Sporting Code: The General Assembly approved various amendments to the Sporting Code, amongst which more visibility for the FMNRs, with their logo visible on the podium for the ceremonies and a protocol for receiving Officials for the FIM World Championship Events from 2020. These amendments will also be included in the supplementary regulations.

FMN Anniversaries and FIM Awards and Recognitions: Ten FMNs were congratulated on their anniversaries: 10 years for RMCJ (Jordan), 20 for FMCU (Uganda), 40 for FDEPEM (Peru), FTM (Tunisia), OAA (Oman), UNIMOTO (Nicaragua), 50 for MSS (Singapore), 60 for FCM (Cuba), 70 for MEMSI (Israel), and 110 years for AMZS from Slovenia. Several Honorary memberships were also approved by the Assembly: Mr Oriol PUIG BULTO and Mr André PAHUD for the CTI, respectively as Honorary Director and Honorary Member, Mr Jan-Eric SÄLLQVIST and Mr Faryd SUNGKAR as CMS Honorary Members, Dr Reinhard KRAENZLER as Honorary Member of the CMI, and Mr Rui CASTRO as Honorary Member of the CTR. For their services to motorcycling, Gold Medals Nicolas Rodil del Valle were awarded to Mr Robert RASOR, Honorary FIM Vice President, from the USA, and Mr Michio ARAI, President of Arai Helmet Ltd., from Japan. Finally, for the first time a World Touring Challenge Award was conferred to Mr Roberto NATALI.

New uniforms: The FIM will be renewing its uniforms for the FIM Officials in 2020. The new outfits created in partnership with Europe Suisse were presented to the delegates. All old uniforms will be collected and recycled via specialised Swiss companies.