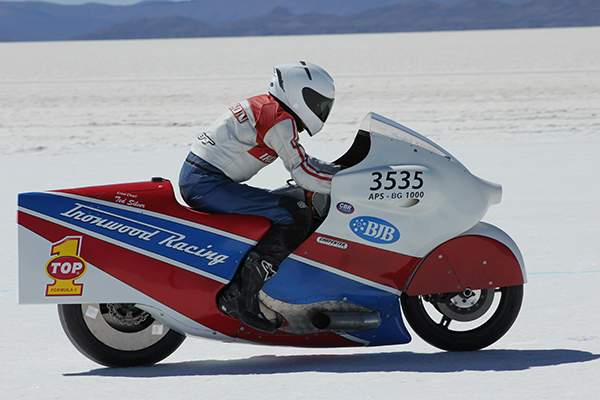 Land-speed racing is a perpetual learning process, one that rewards patience and persistence. It was a lesson well echoed at the 2017 Top of the World Land Speed Trial in Bolivia, especially for Ralph Hudson. After struggling nearly all week with technical issues, Hudson was able to make two successful runs on the final day of the meet in order to claim the current FIM World Record for fastest Sit On Motorcycle at a stunning 284.361 mph.

Many of Hudson’s struggles stemmed from competing at the Salar de Uyuni’s staggering 12,000-ft elevation (3,600 km). Running his turbo-charged Suzuki GSX-R1000-powered motorcycle in the thin air brought about more challenges than he (or any of the other teams) anticipated. In this type of uncharted territory, one can only learn by doing. Now armed with experience, Hudson is ready to make another attempt—this time with additional tools and resources that he hopes will bring him a new FIM World Record.

Hudson is in the unique position of currently holding the record he aims to break. Even after setting the FIM World Record last year in Uyuni, Ralph admits there is more left on the table—namely, the 300-mph barrier. Hudson is once again going head-to-head with his rival and friend Al Lamb in Bolivia, and the two will race to breach the 300-mph mark. They might both get there, but only one will come away with the FIM World Record for fastest-ever motorcycle (non-streamlined).

FIM: Despite your success at the 2017 Top of the World Land Speed Trial last year, you dealt with a lot of issues—low boost and overheating. What have you changed on the bike for this year?
RH: I had a rough time of it the first trip with a lot of things going wrong. Now I think the bike is prepped better. Turns out when I got back [from Bolivia in 2017] I found out we had a cracked exhaust manifold. So I think that made a big difference in the turbo performance. I was really disappointed that I didn’t have more boost. But when you’re there, there’s not much you can do.
Looking at the data we found some other issues. The intake was drawing a lot of its air from inside the fairing and it didn’t dawn on me that it would be so hot in there. With the air thin already, when you heat it, it gets even thinner. So I built a different scoop on the side of the fairing to bring more cold air in to the turbo.

FIM: Another problem you had was overheating, which was odd since it was so cold there. Were you able to address that issue?
Yes, that was one of the other problems we had. The bike would overheat driving from the pits to the start line [Ralph started at Mile 3]. Something that I didn’t know and wouldn’t have predicted—I’m not a physicist—is that the thin air does not absorb heat as fast as the air down here near sea level. I couldn’t understand why it took so long for the bike to cool down after it got hot. And I know that Mike Cook was getting pretty impatient with me, ‘Can you run now?’ and it’s just barely below boiling. I’m like, ‘No.’ ‘Well when can you run?!’ ‘I don’t know! As soon as I can. I’ll tell you.’
I built a trailer this time (to tow the motorcycle to the start at Mile 3). And I’m bringing a generator and a fan. Hopefully it can cool the engine down in between runs more quickly.

FIM: After your FIM World Record last year, you were invited to attend the FIM Gala in Andorra alongside riders like Marc Marquez and Ryan Dungey. You pointed out that you were the only champion on stage who built your own race bike.
I think it’s extremely satisfying to build the equipment and be successful with it, because you get both sides of it. It’s kind of a different world today. People are more specialized and it doesn’t seem that as many people are mechanically inclined; they just never have the opportunity to learn how to do that stuff.
From a young age I always enjoyed pulling engines apart and trying to improve them and put them back together. It was easier back in the ‘70’s. Almost anything you did was an improvement. But now, the factories have gotten so good, you can hurt the engine! [laughs] With the best intentions!

FIM: Give us some background on the design of your race bike.
As far as building the Bolivia bike, I had the idea to do that almost the first time I went [to the salt flats]. It was partly inspired by looking at the German NSU—I think they were East Germans—they came in, like, ‘57 and ‘58 to Bonneville and they went really fast with pretty small engines. When I was a kid before I ever dreamed of going to Bonneville, I was just intrigued by it. I looked at the pictures of the bikes and they looked like little airplanes with no wings. In those days you could build a whole streamliner and put your feet out the bottom to hold it up and get tucked in in the top. Now the rules don’t allow that [FIM safety rules have changed as speeds have increased]; they require that you have to be able to see the entire rider from both sides and above without using clear materials [to compete in the “sit on motorcycle,” partially streamlined category]. Even within the rule structure we currently have, I started thinking about 1975 or so that I wanted to build an airfoil and put a motorcycle inside of it. Then cut it out on the sides and use your body to complete the shape of the airfoil. I carried that idea around for probably 30 years and sketched it on countless cocktail napkins. I finally got to the point where I thought, ‘Am I ever going to try it? Or am I going to be the guy who’s just always talked about it?’

FIM: There are now multiple locations that host FIM World Record events, including Lake Gairdner, Australia. Why do you choose to compete in Bolivia?
The salt flats were so good in Bolivia. Australia, I understand, is still a little iffy. They can get rained out on the last day. I’ve heard that Lake Gairdner has had issues with wet salt and I understand this year they did, too. I might be convinced to go down there and try it.
Looking at the weather charts for Bolivia, this time of year the average rainfall is 0.0 [inches]. It’s not even a 0.1 or anything. Even though the altitude is obviously a challenge in Bolivia, the condition of the salt is just so incredible. It was absolutely dry and seemed like a lot of traction.